Showing posts from February, 2009
Show All

well read cow Originally uploaded by fuzzydragons Having a relaxing day before he goes mountain climbing :p If he gets past page 36 of that book it will be farther then I have ever gotten. I've tried twice now to read that book and I always fall asleep. I usually finish a book no matter how bad it is, but can't finish one that I can't stay awake reading :p Classic does not always mean its good. (people are going to think I'm nuts talking about a stuffed cow reading, if they have never been to the blog before :p)
5 comments
Read more

Cow in a Cup

Cow in a Cup Originally uploaded by fuzzydragons Bit too much to drink little cow :/ Careful you might drown in that cup :p Copyright Jennifer Rose Phillip Finished dragon? I think I'm done with the dragon and now just need to finish the stones. If the dragon needs to be darkened I could do that when the stonework is finished. oh nope not finished yet. Need to darken some of the petals around his head so they are not all the same. Petals or feathers, have never actually said because I don't know. I've had people say both when looking at the dragons I draw that look like this. What do you think? Petals or feathers? I really am going to have to make a parachute for my little cow and toss him off the steps. I think a plastic bag might work tied to his horns :p And if people start asking me questions about taking photos of my little cow when I'm out, I can just play a tourist. Hey if I remembered any French besides numbers, the days of the week and how to say my na
6 comments
Read more

tree climbing Originally uploaded by fuzzydragons Stuck in a tree?? o.0 Went for walk and ended up in the graveyard at the East and Old Church . I love walking around the very small space and trying to read the gravestones. A lot of them are so old they are just little stumps in the ground, or they are sinking into the earth. Some of the detail on them is very intricate. The letters ranging from simple block letters to really fancy cursive. As we were walking around (it is very small, the actual grave site lawn is not that much bigger then the land our flat complex sits on) this older man starts talking to us about the graves and the area. Was interesting and he had keys to the church so asked if we wanted to see the organ because I've never seen it. I've said before I'm not a religious person but the inside of the church was beautiful. The stain glass windows (memorials to the first and second world war), were gorgeous and you can't see them from the outside as t
7 comments
Read more

long way to fall Originally uploaded by fuzzydragons He would have blown away today . Things were flying around so he would have flown if I had of tied him to a kite. hmmm that is actually a good idea.... Copyright Jennifer Rose Phillip Just need to darken things now on this. I want to make the stone look really bumpy and cracked so that should be fun to do :) Because this is 11 by 14 inches its going to take a couple of scans to put together so people can get a better look at it. I'm debating on whether or not to add a hint of colour to the stone work, just a bit to suggest the colours it might have been years ago
5 comments
Read more

Helping with the washing

Helping with the washing Originally uploaded by fuzzydragons Show off :p (I am sure that the neighbours are thinking I'm nuts taking pictures of the washing line lol) Pic #2 of 30 I have a few more ideas for pictures and after that I will probably struggle to think of something to put in the picture. I was afraid he would blow away in the wind lol a flying cow! Copyright Jennifer Rose Phillip I decided to re-do a piece I started a few weeks ago and this time just use normal pencils. This is no where near being finished, its only the first layer and I'm roughing in where the shadows will go. I hope to have most of it done tomorrow so that I can start on 6 to 9 ACEOs to put with my portfolio. Those shouldn't take too long, at the most 3 hours a card (1 if I go really quick but I want them to look good :p)
7 comments
Read more

Only way to travel

Only way to travel Originally uploaded by fuzzydragons Leslie is doing 30 days with 1 object so I'm going to give it a try. Should help me figure out the settings on our camera a bit more. (well thats the idea anyway :p) Copyright Jennifer Rose Phillip ACEO Coloured Pencils My blog posts for this week might be very short as I really do need to finish a few graphite pieces for my portfolio to send off. I have till Monday at the latest to get everything sent off. The closing date isn't for a month but I want to get it sent away early. I got my portfolio together and realized that there is hardly any work that isn't done with coloured pencils so I thought I should add a few done with normals pencils, so it doesn't look like it is the only thing that I do. Mr.Fuzzy played farmer today. Planted more vegetables he wont eat and cursed the cats :p I do hope he does manage to grow a gigantic pumpkin though. Would look really cool painted :p (don't eat pumpkin, but c
12 comments
Read more 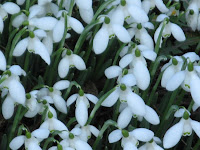 Someone who had the flat before us must have loved snowdrops because there is a row of them by the rose hedge and there are all kinds over the whole of the lawn. Not going to complain as they are really pretty when they come up :) And Mr. Fuzzy discovered some barbed wire in one of the hedges o.0 who puts barbed wire in a hedge? So its going to have a meeting with an angle grinder soon (the wire is just dangerous) And the paths that were fixed are crumbling now. Good thing we just rent because this flat is a money trap :p The path in the back we will probably just end up fixing ourselves as it will be a lot quicker then getting the council to. Hey I get to use a sledge hammer to break the broken stuff up more (ok maybe not, dont' think I could even lift one lol) Punk rocker dove with a mohawk :p What do you want?!? Stop taking pictures and bring me more food please! These doves have been back everyday for the last 2 weeks. Not sure which one is female or male. I am really glad th
Read more

By Mr Fuzzy February 20, 2009
Mr Fuzzy here (I now have posting rights :-D *Cackles*) Ok so after LOTS of frustration and temptation to get drunk in an attempt to make sense of it, I FINALLY got disqus to install and work. (its a new comment handling applet thing, meant to try and reduce spam, as comments which get a poor rating automatically dissappear as voted by people (if it gets abused then it goes, the threshold for stuff vanishing is pretty high to counter that though :-) If its too annoying for people commenting then it also will go, so leave a message and let us know :-) ) Issues: 1) Will not work with Ubuntu linux (Which is what is on Mrs Fuzzy's laptop and what I had loaded on my desktop) which meant a lot of wasted time, till I logged into Windows XP where it worked fine. 2) Took a few goes tinkering around for it to work, found that comments had to be set to "full page" and not "pop-up" to get it to work 3) I don't get the name, I realise its a trademarkable name, but
Read more

By Jennifer Rose February 20, 2009
I'm trying to make the columns and post body wider like they are here . But its not working *angry face* I have a love hate relationship with any kind of coding. Half the time it doesn't work and the times it does is because I had Mr.Fuzzy help lol When I look at the code its just a jumble of letters and numbers (another reason Mr.Fuzzy think I might be dyslexic) So if the blog looks odd over the next couple of days its because I messed something up lol (Yes I did have to fix it...again....ugh widgets...too wide and I still think blogger has horrible settings page layouts...why arent the widgets html in the blog html...its annoying!! (good for non geeks...but confusing for geeks like moi >> Mr F)
6 comments
Read more

Scottish Word of the Week Feb, 20

"Mr.Angry" Copyright Jennifer Rose Phillip For sale here I haven't posted a Scottish word for almost a month so here are 2 :D 1. hochmagandy 2. bawbee Answer to the last Scottish word: 1. byke is a wasp's nest I might run out of words eventually, but there are lots left and I could always ask older people because they use words that people don't really use now. Its actually interesting and sad at the same time how some words are lost and why they are lost.
4 comments
Read more

I'm horrible at remembering to post when people give me awards or tag me, (which is bad, sorry), so here are a few that I can remember (I'm so sorry if I missed someone, I think I did but can't seem to find the posts). From Michelle and Vic awarded me this: :D I'm supposed to say 7 things that I love and pass it on. hmmm if anyone hasn't been tagged/awarded please award yourself (kinda cheating yeah :p) 1. I love...snakes :D I'm just fascinated by them. I never really wanted one until I adopted my sisters and now I really want another one. A Ball Python would be fine, but I would love a Rainbow Boa or another Red Tail (no idea where I would put that, so that would def. have to wait) 2. I love... Great Big Sea :D Would love to see them live. I introduced them to Mr.Fuzzy and he loves them now too :) We have a lot of music and have different tastes but we both can put any Great Big Sea song on and we will both listen to it. 3. I love...um chocolate! Its e
3 comments
Read more

creative space feb19 Originally uploaded by fuzzydragons I guess this would count as my creative space today as we have to go through all of these and figure out what goes where. And there are more in the cupboard lol No idea where we are going to put all of them in our yard, but its going to be colourful (and look a lot better then it did when we got the flat). Mr.Fuzzy was digging up the drying green in the back to extend one of the dirt beds so he could put veggies or herbs in it, and he almost hit a gas pipe (8 inches down) o.0 The guy upstairs has gas so it feeds his flat. Mr.Fuzzy phoned the gas people to ask where the pipe is so he doesn't blow himself up, and they said that they don't know. What? Isn't that a little dangerous not knowing where the pipes are? So they are sending someone out to find them (but we find out that its not required for the gas companies to know where the pipes are after they leave private ground, public ground they need to know though.
8 comments
Read more