Showing posts from September, 2013
Show All

I really like this :) Its simple, and besides having to wait a few hours for the paint to dry before I use an ink pen, it is pretty quick. Def. going to be see a lot of work  like this in the future :D
6 comments
Read more

By Jennifer Rose September 30, 2013
I was 11 when this was first released...makes me feel old lol
Post a Comment
Read more

Scottish Word of the Week

I found my little Scottish word book, so thought I would start this up again :) This weeks word: 1. laroch Don't ask me to say it tho, I can't make the proper Scottish "ch" sound :p
1 comment
Read more

So, after folding about 2 dozen little cranes, this is what I did with them.I folded a bunch of different birds, so will have to print with them and see the patterns that show up. And shocker, I didn't get any paint on me :p Random Sky photo :p
6 comments
Read more

Giant kelpies :D Maquettes of the 30 metre statues :) I am still having problems with my lung, the stupid right one, but since they will only be in Dundee for a week, and some idiots already vandalized them I had to go see them,(wheezing and all :p) When they are finished I will have to go see them as the size is hard to imagine without seeing them first hand.
5 comments
Read more

Finished :) Really happy with how this turned out. Starting to think I should have went into some kind of science, so I could take Zoology in uni and then become an ornithologist. But I stuck with art, mostly because it was easy, and also my grades were generally not that good in most classes other then English. (wouldn't think that with the way I write :p). I guess I could start focusing more on birds in art more then I already do. Learn more about bird anatomy and research other avian artists.
6 comments
Read more

A bit more shading and then a basic background, and I can put it away :)
2 comments
Read more

I thought I would have this done today, but my hand started to go numb, so had to stop :/ So crosses fingers I will have it finished tomorrow :)
4 comments
Read more

The 5th Wave (The 5th Wave #1) byRick Yancey OK, the writing is not very good, but I still liked this book. Sometimes you just want to read a book where you don't have to think. Typical alien invasion story; mother ship shows up, and then people start dying. There is a huge Body Snatchers influence, which is an idea that has been done to death. (not really a spoiler since it is covered/hinted at in the start of the book) A quick read, that I found only really lagged when the love story was developed. Not every YA story needs a love interest, or a love triangle,(which I am sure will happen in the next book). If you get rid of the love story and stick to the protagonist's main guest, I probably would have rated this story higher. I thought the ending was fast paced and did have me rooting for the main character to succeed, but then the love story reared its ugly head, and I just wanted to skip that part again. I do want to read the next one, very
4 comments
Read more 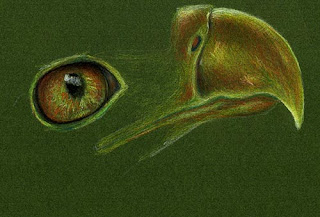 I really like the copper look this has, should have used dark green paper before now for birds. And as usual, I can't think of a title. I should just open a dictionary, close my eyes, and point at something....
1 comment
Read more

Just messing around with watercolors....

Just messing around with watercolors , a photo by fuzzydragons on Flickr. I was really just wanting to see what would happen with the paint if the paper was soaking wet. The paint didn't actually spread as much as I thought it would.
2 comments
Read more
By Jennifer Rose September 16, 2013

Another bird, surprise surprise :p  I really need to try to get to some of the falconry places in the area to take some photos and maybe hold some raptors. I would feel so much better using my own photos, but I only have a few of birds that I can use. At least the ones I do use are freely given for artistic use. And today was interesting....   Still sick, so doc said I need a chest x-ray to try to get to the bottom of the problem. I think I have her stumped as to what the problem is lol
8 comments
Read more

Ready Player One byErnest Cline  Wrote a review already at goodreads, and goodreads ate it :/ So, all I will say is this book while entertaining, was horribly written and just seemed like an excuse for the author to prove how much of a geek he is and how much he remembers of the 80's :/ The information dumps about the decade, stopped the book in its tracks every time they happened, which felt like all the time. I don't understand the hype about this book, the 80's were not that great of a decade. Near the end, I wanted the bad guys to win, so that maybe something would break up the monotonous text of info about the 80's. 3 books read this month, and so far I really have only liked 1 :/ I'm really not trying to focus on the negative aspects of a book, it just it seems the books I read rave reviews about are obviously not for me. Hopefully the one I am reading now, I feel better about when I finish. *crosses fingers*
2 comments
Read more 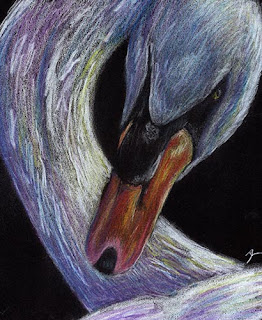 For Sale Finished the swan. While I don't like Stonehenge paper, I do like the more painterly look you get with the black paper. I need to find a black paper that I can find easily and doesn't cost an arm and a leg.
Post a Comment
Read more 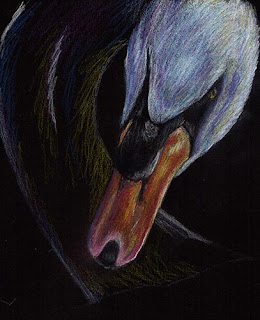 More work on the swan :) Of course, second week of college, and I get a lung infection :/ Steroids and antibiotics to try to get rid of it. I swear I'm cursed lol
2 comments
Read more

I was really looking forward to the conclusion of this trilogy, but this was so anticlimactic I actually don't even know how to feel about it. The two story's and characters merge in this final book, but I felt that they world and the characters work better by themselves. Together as one happy (sarcasm) family, the writing felt forced in a lot of places. This was pretty predictable, maybe that's one reason why I was disappointed. Near the end, it felt like she just gave up, got really lazy, and didn't know what to write, so lets the reader fill in all the blanks? Which is fine in a story, if it was done previously in the series, which I don't think it was to this degree. 2/5 stars
2 comments
Read more 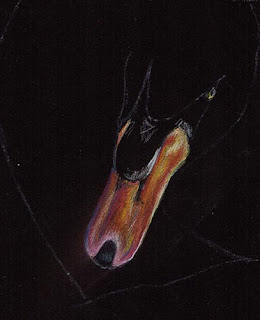 So I am not buying any more paper until I go though the pile I have. I found all kinds of murano and mi-tientes paper I didn't even know I had the other day, so it will probably be awhile before I buy more. This is just a small scrap of black Stonehenge that was in a drawer, about 5 by 5.5 inches? The black stonehenge paper is the only colour/shade that I like. I find the paper way too soft for coloured pencils, but great for printmaking, which is what is was made for originally. No  more pape doesn't mean I can't get any more pencils tho :p
4 comments
Read more

Awww, little lemmings :) This is the type of public art I like, it has an actual tie to the area and fits in with the environment around it. I really need to play that game again, its very addicting :p    We have only done 1 drawing at college, just lots of research and reading. Going through withdrawals so needed to draw something quick, a bird of course :p
2 comments
Read more

Battle Royale byKoushun Takami, Yuji Oniki (Translator)  I've seen the movie, so knew the book would be violent, so that wasn't a shock, but if a person reads this book with no idea what it is about, the violence will probably come as a huge surprise. I did think the book was better at developing the characters and their back stories. You get to care more about the main characters surviving, and even tho I knew who survived already, I didn't want them to get hurt. So many people compare The Hunger Games to this story, and yes they are both about kids killing each other but I would say this is the better of the 2, not because its an original idea, I think it is better at showing the panic and fear that the kids feel while they try to stay alive. Avoid if any type of violence in a book makes you squeamish.  4 out of 5
Post a Comment
Read more 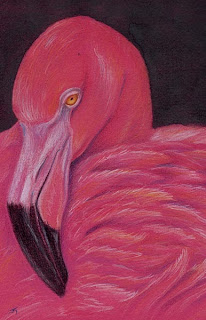 For Sale Finished my pink flamingo. Really like how the feathers look, will use ink for the background next time so it is really dark. Now onto another pink drawing lol
8 comments
Read more
More posts